NNPC secures itself of a strong maritime network in Rotterdam

Rotterdam is one of the top 10 global insurance markets. The city is the place to be for the maritime insurance market and is actively strengthening this position. The city is, therefore, delighted that the NNPC has taken an office at Blaak since February.

The Noord Nederlandsche P&I Club (NNPC) is a non-profit insurer specialised in insurance in the maritime sector and was established in 1937 in the city of Groningen for and by shipowners. P&I clubs provide insurance for risks that ordinary insurance companies are unwilling to cover.

According to Reinier Jansen, who works in the commercial department of the club as a business developer, the NNPC is a mutual insurer in which every member of the club is also a co-owner: 'Each member pays a premium which is used to collectively pay out claims. The balance sheet is prepared at the end of each year.’

NNPC has also set up NNPC Correspondents with Niels van der Noll as manager. Both men work from the office in Rotterdam. NNPC Correspondents provides services to third parties, not only other P&I Clubs, but also shipping companies, captains or ship's agents who can call upon its expertise. 'A captain or shipowner can also call us the moment an incident occurs.’ For example, in the event of cargo damage, such as contamination of liquid cargoes, damage to bulk cargoes or to containers. The P&I Correspondent arranges for the cause and extent of the damage to be investigated and maintains contact with other parties.

Keeping the client properly informed also plays an important role. In addition to cargo damage, P&I insurance also covers crew issues, oil spills, stowaways on board and other issues where the liability of the insured is at stake. According to Van der Noll, the damage can be so extensive that the cargo receiver will require a guarantee for it. 'Those guarantees are arranged through P&I clubs. They can be arranged within half an hour to a day, in contrast to a bank guarantee, which can take up to 14 days. This can be done so quickly because the club knows its members.’ And because these clubs jointly insure 80% of the world fleet, they have a high degree of reliability, notes Van der Noll.

According to Jansen, there are four important reasons why the NNPC has chosen Rotterdam for its second office.

The first being that the club has traditionally had a large number of members and therefore already had a strong network in Rotterdam. 'We want to further strengthen and expand that network by having our own place in the city. The maritime insurance market is strongly represented, from the maritime lawyers and marine surveyors to insurance brokers who play an essential role in arranging the insurance package on behalf of the shipping company. If necessary, you can be sitting around the table with them within an hour. People who are experts in their field and for whom collaborating with chain partners comes as second nature.’

As second reason, Jansen mentions Rotterdam's European profile. Being located in the largest port in Europe gives us a boost for further growth in Europe.’

Thirdly, Jansen mentions the collaborations that are stimulated by and in the city. A good example is the Rotterdam Maritime Services Community (RMSC), the industry association for maritime business services in the city. It brings together bankers, ship- and insurance brokers, lawyers, governments, classification societies, educational institutions, arbitrators, and insurers. You talk to each other and share and develop professional knowledge together.

Learn more about Rotterdam as a hydrogen hub.

Developments such as hydrogen and autonomous sailing will certainly also be discussed. What is the impact on classification societies, financiers, legislators and certainly on maritime insurers? This question is further elaborated with a network of insurers and brokers in the region within the SMASH! Initiative. SMASH! is a national forum to implement smart shipping and thus strengthen the competitive position of the sector. Seemingly simple questions are very relevant, also for insurers.

For example, we need to find out what legal and insurance arrangements we need if there is a collision between an autonomously sailing ship and a traditional ship with crew on board. Is the traditional ship 1-0 behind with the idea that a computer cannot make a mistake, or is it 1-0 ahead because a human being has qualities that a computer doesn't have?’ 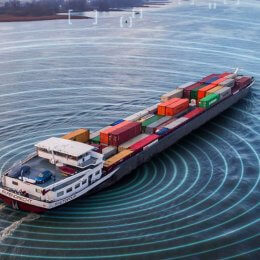